This detailed plastic Egyptian Mummy Toy toy is well-made and realistic in both color and appearance. It is 2 1/2 inches tall. This little toy showing a sarcophagus of an Egyptian pharaoh fits well in a diorama for a school project about ancient Egypt or is a nice keepsake for a collector of religious symbols. Check out our other Kings and Queens and Ancient Egyptian toys and gifts.

Mummy cases or sarcophagi were used by the ancient Egyptians as tombs for the mummified remains of important leaders. As the belief of the time was that one took whatever was buried with them on into the afterlife, many Pharaohs and important religious leaders had fortunes in gold and jewels buried with them, both within their sarcophagus and in the burial chambers. Many sarcophagi had intricate locks, powerful spells, and hidden lethal booby traps placed on them to insure the individual would rest undisturbed, but nearly all were foiled and looted by grave robbers. 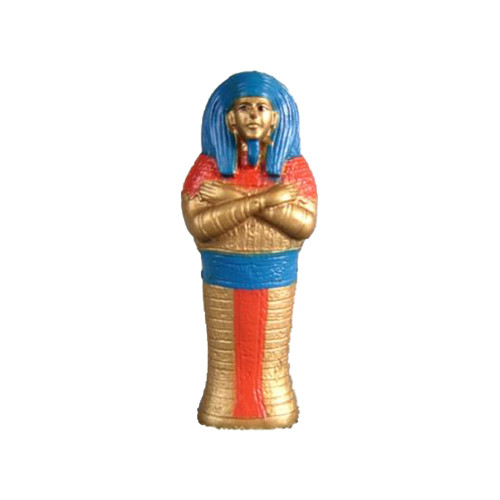