Our Plastic Golden Lion Tamarin Our plastic golden lion tamarin measures 2 1/4 inches from its head to the curve in its flexible tail (1 1/4 inches from nose to rump, not including the length of its tail). Our solid plastic tamarin has such realistic features, it can be used to illustrate school reports and projects, decorate rainforest-themed birthday cakes, used as party favors, and can be added to your rainforest or primate collection. It can also be used as a toy except for very young children (it's small). This monkey is made out of plastic that's slightly flexible, but not posable. Its name is moulded onto the bottom. See or selection of other monkey figurines as well as our South American rainforest animals.

The golden lion tamarin is a highly endangered New World monkey. It has a flat nose but its tail, although long, is not prehensile. It is found in the rain forests of Brazil and may only have 1000 individuals left in the wild. It is arboreal, diurnal and lives in small groups of about 14 individuals. It derives its name from its lion-like features. The golden lion tamarin is a reddish orange to golden brown in color. Its hair is longer and darker around the face, forming a mane on top of the head and on the cheeks and throat. Its limbs are slender yet capable with sharp claw-like nails (called tegulae), befitting its strictly arboreal life. 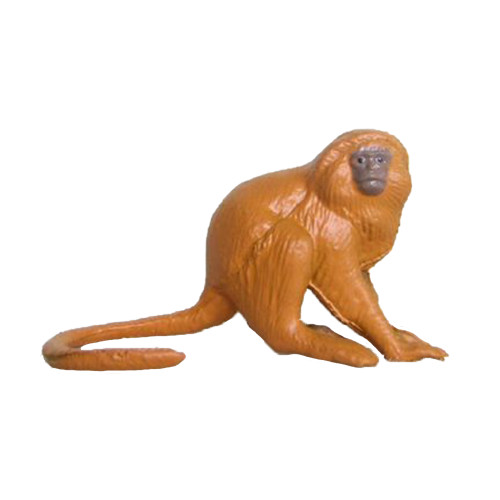