INSECTS GALORE! Explore our huge supply of realistic anatomically correct BEETLE and INSECT toy replicas. We have different sizes and many common and unusual species. Use them fin science projects, toy insect collections or gags.

This engaging, realistic-looking plastic stag beetle is made of strong, durable plastic and is very good quality. This replica is about three times the size of a real stag beetle, so you can see every ridge and groove of its body! This stag beetle replica is a wonderful gift for your avid insect lover, a fabulous toy for your youngling, or simply as a conversation piece. It is 3 inches long, and hyper-realistic! Check out our other insect toys and gifts. About Stag Beetles The stag beetle is an extremely distinctive insect due to the male's large pinchers, and it is native to the UK. Stag beetles weigh only .02 ounces, but they are the largest land insect in the UK. Adult stag beetles have a lifespan of 4 months - they can only survive between the months of May and August. Stag beetles, despite their beastly appearance, are in fact not usually aggressive towards humans. The male stag beetle has very large antler-like pinchers, which is where the species gets its name. These pinchers are not used for biting, however - they are used exclusively to fight other male stag beetles over territorial and mating disputes. The female stag beetle, on the other hand, has much more reasonably sized pinchers, and while they aren't as flashy, they are used for biting and can leave quite the nasty mark! 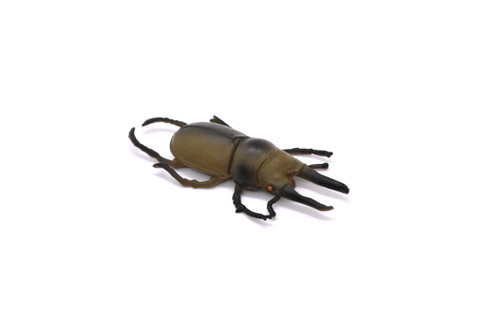